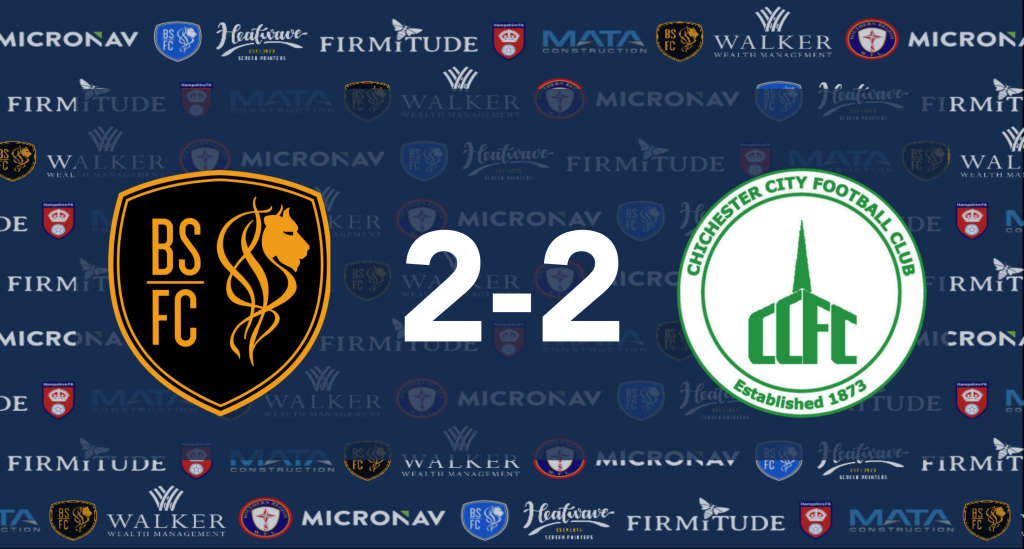 We travelled up the M27 to West Sussex to play Chichester City Women F.C. This was Chichesters first game in this division and the first time we have ever encountered them so we were unsure what to expect.

After a fairly even opening 5 minutes, an unfortunate touch by our defence and a perfectly timed run from the Chichester winger saw her get behind our defence and finish well past Owen to the bottom corner for the first goal of the game after 7 minutes (1-0).

After this, we settled into our rhythm and started to play our football. Probing through balls were getting us down both flanks with tireless overlapping from Eden on the left and Brewer on the right. Their goalkeeper, playing mostly as a sweeper, was also called into action on many occasions when we went through the middle behind their defence to collect the oncoming ball. We chased everything but couldn’t quite get there before it was in the safe hands of the GK. However, on 25 mins, after a beautifully weighted ball from Lonnen-Miles, Brewer finally won the race to poke past the onrushing keeper for a well-deserved equaliser (1-1).

After this we had a good period of control and continued to move their defence around with patient and composed passing across the pitch.

The high position of their goalkeeper was inviting long shots and Benjamin and Lonnen-Miles both saw good efforts well saved by the far busier of the two keepers. Shaw had a couple of sights of goal and managed to get in a trademark sliding effort during a period where the game was being played at our tempo.

On 36 minutes another run behind onto an excellent through ball, saw Folkenstern bundled over on the edge of the box. Lonnen-Miles stepped up to put away the resulting free-kick with a lovely finish in the top of the net. (2-1). The rest of the half played out at our pace, but with no further big chances.

Our levels dropped off in the second half and Chichester seized the opportunity to swing the momentum of the game in their favour after the opening exchanges.

Despite this, we had the better chances early on with Shaw smacking the underside of the crossbar only to see the ball rebound in front of the line. We continued to make inroads down both flanks with Eden, now playing higher up the pitch, getting to their goal line on a few occasions, but unfortunately, no resulting goals.

Despite a good chance for Brewer at the front post, the open nature of the game meant a goal for either side was equally likely. Sadly, for us, that goal came for the home team on the 70th minute. They finally broke the resolve of our stoic defence, which was brilliantly marshalled by Yeo, and a good finish made it 2-2. This is how it stayed as the game ebbed and flowed, but ultimately lacked the quality of the first half.

It always feels like 2 points dropped rather than 1 gained when you are ahead, but ultimately we can have no complaints about an away draw against a very well organised Chichester side. We head into game week 4 still unbeaten!

Player of the match: Becky Yeo for a solid back-line playing just her first game at CB for the first team.

Managers player of the match: Jasmine Hughes who impressed throughout.

Rory: Lauren Brewer who having just driven 90 minutes up the M27 questioned whether Chichester have just been promoted from the Dorset League.

No Dogs Allowed on site.

A good run out yesterday against @Winchcityflyers in tough conditions ☀️🥵. A strong second half display flipped the game in a close encounter between two well matched sides. 🖤💛🦁

Due to late cancellation we are looking for a friendly for tomorrow and the 14th & 21st August. We are happy to travel